People have been asking us for months now what the new Google Chrome “ad filter” will look like. The answer is harder to determine than it might seem, because this update to Chrome wasn’t available in any of the Chromium builds when we were testing. Apparently, earlier today, the change landed in Chrome 64 on Android – but not desktop, where we wanted to test. So we had to do some digging.

We felt that you, our users, needed to know what to expect. Our investigations into the Coalition for Better Ads (CBA) yielded surprising results. We took the specifications from a white paper from last year called Determining a Better Ads Standard Based on User Experience Data.

The CBA’s white paper tested 55 different types of desktop ads for acceptability. We compared what the CBA qualified as acceptable ads against the the current Acceptable Ads definition. (The Acceptable Ads criteria were maintained by eyeo, with its community, but future iterations are in the hands of the Acceptable Ads Committee, an independent body). 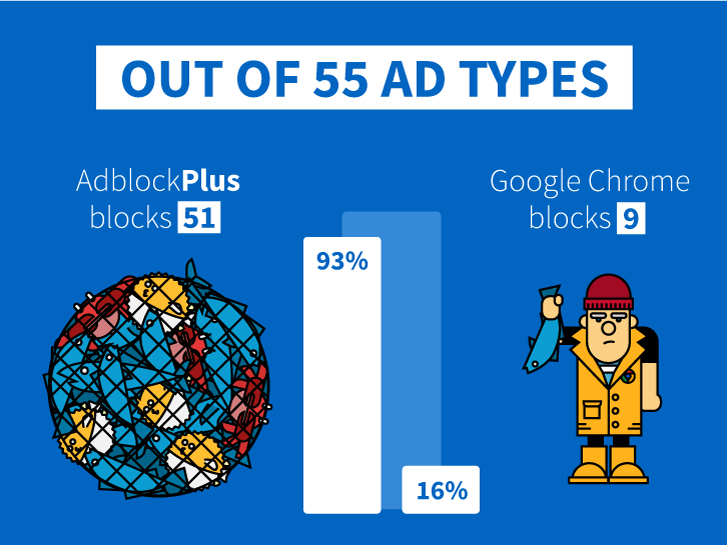 Google has announced that it will follow the CBA’s definition for ad acceptability. From 55 types of ads, the CBA says that only nine of those ad types are egregious enough to block.

*It was not always clear where the CBA drew the line, so a few ad types tested were difficult to judge. This was especially true in two cases, both marked in the above spreadsheet with comments. We hope we were accurate in our interpretation. There weren’t many edge cases, though, so it doesn’t affect the big picture.

For example, the CBA says that the following ads and more are permissible:

You get the picture. Apparently, these new CBA standards bravely skim off the ads that may induce massive eye-gougings upon viewing.

In total, the new CBA-endorsed ad skimmer will only block 16.4 percent of the ad types listed in its white paper. In comparison, using the Acceptable Ads standard, Adblock Plus (and other ad blockers) block 51 different ad types, or 92.7 percent of those ads.

Now, in fairness to Google, they had a lot of courage to step into the ad-blocking waters at all. Most of parent company Alphabet’s revenue comes from advertising after all. We’ve always maintained our admiration for Google’s efforts, not to mention those of the CBA.
For some, Google’s double role as enforcer of CBA standards in Chrome and voting member for the CBA is a bit like the fox guarding the henhouse. Yet, looking at the bigger picture, the goals of the CBA are to:

What’s underpinning this is also good, because the proposed system lets users decide for themselves what they want. (“User control” is a synonym for “the internet” IMHO). I mean, users can still download ad blockers, tracking blockers, etc. on Chrome. But now, out of the box, Chrome skims nine out of 55 ad experiences off the top of the pile (not bad).

After doing this experiment, it was clear to us that there was a literal gulf between the CBA and AAC standards. Which … is also cool. Like I said at the outset, part of the reason we did this was because users had asked about the differences, and none of the askers had investigated. Now we know – and knowing is half the battle.

Now that we have the quantitative line in the sand, the qualitative difference between the AAC and CBA becomes even clearer: