In the past year or so native ads have gone from ad conference fetish to John Oliver’s mainstream television program on HBO. As these “sponsored posts” and “related articles” and “stories you might be interested in” have grown in popularity, a lot of people have asked whether users of Adblock Plus are able to block them.

However, because native ads are often built so intricately into the web page’s fabric, it is a different technical challenge than normal blocking. The second question people ask is what we think of native ads. That question is a bit more complicated to answer.

Adblock Plus actually encourages some ads – namely better ads that our users accept. And it could be argued that native ads are a step in the right direction as they dispense with the flash and focus on providing useful information. On the other hand, native ads often purposefully disguise their ad identity, and an ad that lies to users may be the most egregious kind of all. The first question to answer, however, is how users’ filters can sift out these tightly interwoven elements from pages without breaking the pages.

How ABP enables users to block native ads
First off, it’s important to grasp the difference between blocking ads and hiding them. Most types of advertisements are separate from the main web content that a user is trying to view, and this separation means that Adblock Plus is able to block the ad from being downloaded while letting the main webpage through to the computer screen.

Native ad widgets appear within the body of the rest of the web page, meaning it is impossible to not download them along with the pages that the user wants to see. Ad hiding is the technique that removes an ad from being seen by the user even though it has been downloaded. There is a further complication for ad hiding – many widgets that contain native ads also contain links to further news articles. However, native ads that are mixed up with genuine news articles still show all of the usual scripting that identify them as ads, and that means they are still hidden from the user by Adblock Plus.

For example, this page contains three “native” widgets (or at least it did when I tested it). Two of these contain just ads. Users who’ve activated EasyList, the standard ABP list, do not see these two at all.

Here’s how it looks: the first picture below shows the page with Adblock Plus disabled. Notice the reddened ad within the widget? That’s our friend above. In the second screenshot Adblock Plus is on. Greetings Mr. Widget. Ciao-ciao, Mr. Ad: 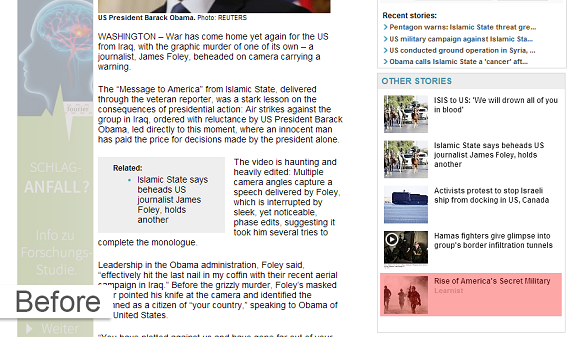 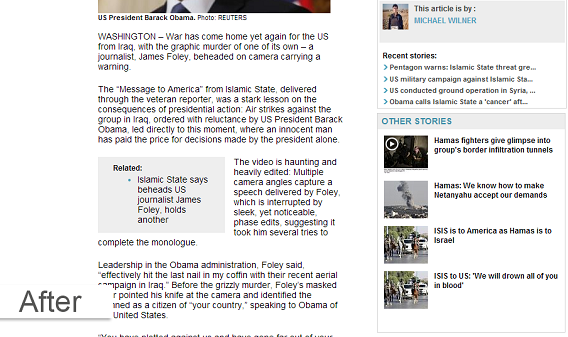 So … if it is so straightforward to identify ads in multi-use widgets like this, why is it so hard to label native ads appropriately? We at Adblock Plus do not have an issue with the principle of native ads, but an ad is still an ad and if it is not clearly shown to be one then it is misleading for the user.

Our take on native ads
The trouble with native ads is that they often masquerade as content under opaque, ambiguous labels. This makes it difficult for readers to differentiate real articles from the ads that surround them. It’s a lack of clear labeling, or maybe it’s downright duplicity, and it’s why John Oliver was correct: it’s not OK to intentionally fudge the “church and state” divide between ad and article.

On the other hand, the encouraging aspect about native ads is that they’re built to not intrude. It’s their reason for existing, actually. That’s uplifting, because there is other news coming from the brave new world of advertising.

And now it’s kind of gone beyond ad exec fetish because John Oliver.

Sponsored advertising should be labeled clearly, even obviously. If it isn’t it’s kind of like sneaky product placements in movies, which can go very wrong.

The key is non-intrusive, honest ads, which Adblock Plus actively welcomes. If the ad is clearly marked, doesn’t beat you over the head and is informative, then we have no problem with that native ad. A clearly labeled native ad is far and away superior to some of the ideas being punted around ad circles recently.

Native schmative …
Regardless of how native ads are labeled, not labeled or disguised, Adblock Plus users can block them. If advertisers respect the “church and state” border separating editorial from advertising, we don’t have a problem. But when this division gets muddied, especially when done so intentionally, we have a big problem.