I recently released Adblock Plus 1.0.2 to fix a regression that would affect any user upgrading to Firefox 3.0.9. In the end, Adblock Plus upgrade was released only six days before Firefox 3.0.9 and the big question is of course — was that enough time? How many users ended up using the new Firefox release with an outdated Adblock Plus version?

Unfortunately, AMO statistics don’t allow correlating add-on versions with application versions so any estimates will require a fair amount of guessing. Also, AMO will show only absolute active daily users numbers which are hard to interpret due to strong day-to-day variation. I am more interested in “what percentage of my users upgraded on day X?” So I used gnuplot with AMO data to create a more useful graph: 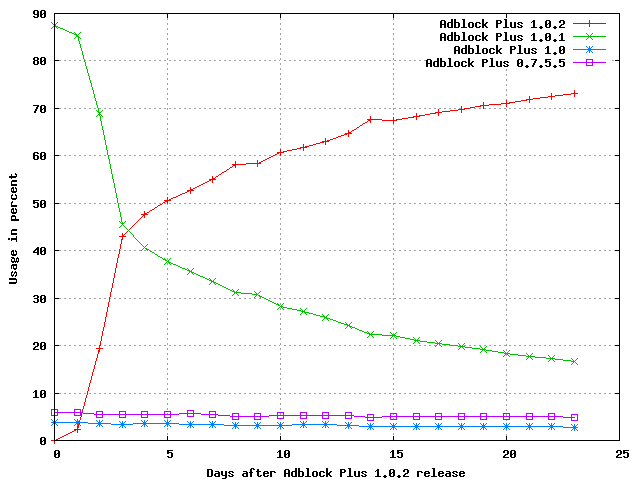 And what about the Firefox versions used by Adblock Plus users? Here comes another graph for the same period of time: 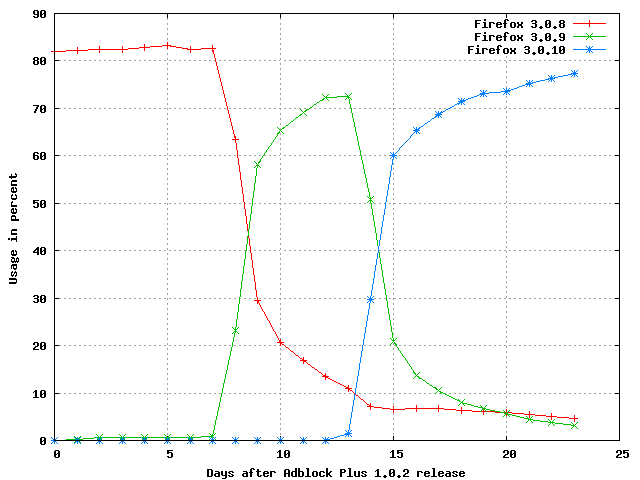 Luckily for me, changes in minor Firefox releases that break extensions are very rare (as far as I remember, that’s the first one ever that affected Adblock Plus). But it does make me think what can be done to make sure users upgrade sooner in cases like this. What if I change the compatibility info for version 1.0.1 on AMO to mark it as not compatible with Firefox 3.0.9/3.0.10, will it eventually give users some useful notification if they have it installed in Firefox 3.0.9? I guess Adblock Plus will show up as incompatible next time they update Firefox — and Firefox will offer searching for updates.