Note: I do not usually syndicate blog posts about Adblock Plus to Planet Mozilla. I chose to make an exception for this one to reach more Adblock Plus users.

Another note: This post grew quite long. If you are only interested in what you can do to help the Adblock Plus project, feel free to skip to the last section.

I messed up, really sorry about that. Some people already noticed that Adblock Plus 1.1 release didn’t have the quality you would usually expect. Right now, it looks like there are something like three distinct regressions of which I can only reproduce one so far. And what is worse, I went on vacation only a few days after the release and didn’t have a chance to properly investigate these issues — even less to fix those. So users who are affected and can no longer use Adblock Plus can only revert to Adblock Plus 1.0.2 for now.

People who have been with the project since the beginning will know that this is not the first time I do release and run. Back then I was a frequently flying between Norway and Germany and would occasionally push out a release just before leaving. This went without any real issues, most of the time I was releasing local and rather well-tested changes.

Not so this time. On the one hand, the user base has grown a lot — and with it the requirements on the quality of the releases. I get bug reports for pretty obscure configurations these days. On the other hand, Adblock Plus 1.1 changed some core functionality in a very significant way. This was to improve memory use and performance while cleaning up some old code at the same time — but the changes were pretty complex.

This would usually not be a problem, after all we have several hundred users installing Adblock Plus development builds to help catch issues early. But this time I had to do some late changes to fix issues they discovered — and still rushed out the release despite some concerns because otherwise it would come out significantly later. I also had the impression that there was less feedback on the development builds than usually, probably due to summer vacations. All regressions only happen for some users while not for others which made sure that they weren’t caught before the release.

What is being done now

I am back from my vacation. The bad news still: I cannot start working on these regressions right now. Between my other responsibilities there is very little time left for Adblock Plus and I am still going through my mail some of which contains the info I need to reproduce the issues. I hope that the forum has some useful info as well but I didn’t get to it yet and most likely won’t be able to look at all threads (please send me a mail if you think that something there needs my attention). I should have more time starting Tuesday next week, if everything goes well Adblock Plus 1.1.1 will be released around 10th of August.

How to prevent such issues in future

One measure that will hopefully help catch more issues before release was already implemented shortly before Adblock Plus 1.1 release. Previously I would upload development builds manually whenever major changes are made. Now the builds are created automatically each day if changes are found in the source code repository. And you will get update notifications for development builds, with all changes to the previous development build listed (make sure to click “Show Information” button): 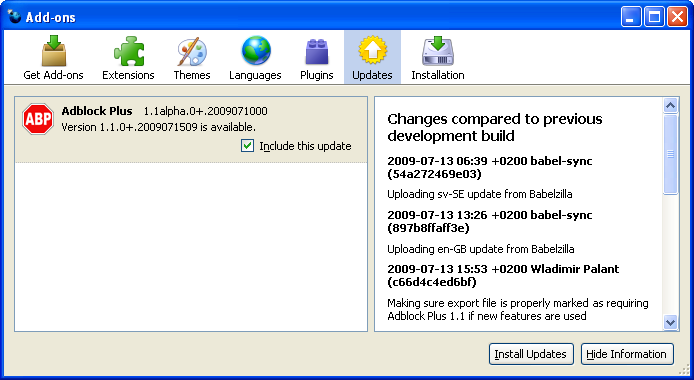 I hope this will make sure that more people are running the latest Adblock Plus development build and I will continue to announce major changes in the corresponding section of the blog. I already see around 400 active daily users for development builds, tendency increasing. If you are one of them, don’t hesitate to report any abnormalities you notice. This is easiest in the forum (you can just hit “post reply” button, registration not required).

Of course you don’t do significant changes shortly before a release — this is something I should have known better. So in future I should accept the fact that the pace of Adblock Plus development is rather moderate, that’s all that is possible with the time available. Saving on the quality is not the solution. If significant changes are necessary this should be more than reason enough to push back a release, as it has been in this project in the past.

The other fact that I need to accept is that I can no longer deal with any issues after a release in just three days. For future releases I should make sure that I have enough time to investigate any issues reported, create a fix if necessary, get it tested by the community and release a new version. Two weeks should be more realistic for that.

The issue that is harder to fix is that I’m hitting my limits with the maintenance of this project. Time has been a big issue lately and while getting more time to work on Adblock Plus is probably an option (I have an idea that I will probably blog about later), it is better to make sure that we don’t have everything depending on a single person. I’ll list the various tasks around Adblock Plus and I hope that some people will feel the urge to help with some of those (contact me then):